The original MF formulation was conceived by Professor H. B. Pacejka with the aim to provide tire/road interaction forces and moments as a function of vertical load, longitudinal and lateral slips, and inclination (or camber) angle; such variables result fundamental to evaluate the tangential interaction regarding the tire dynamics but they don’t take into account the complex multi-physical phenomena occurring at tire/road interface. In particular, the relationship between interaction forces and the cited input variables is highly influenced by further physical effects, linked to tire temperature, tread wear, inflation pressure, compound viscoelastic characteristics and road roughness. 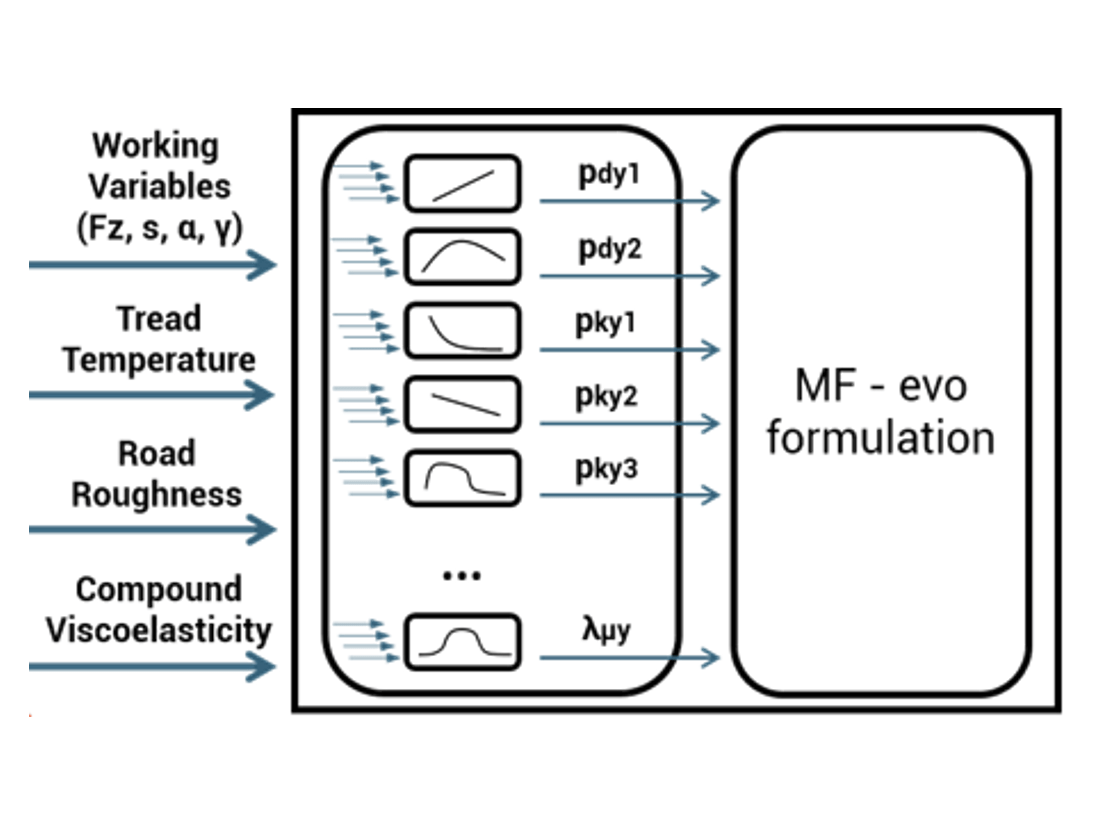 Among these, the influence that, for example, the thermal conditions of the different tread layers have on friction and on stiffness characteristics, is particularly significant and definitely not negligible in case a full reliability of the vehicle dynamics simulations is required in both motorsport and passenger applications.

To take into account of the crucial effects related to grip/temperature relationship, to tire degradation state and to the completely variable boundary conditions under analysis, the employment of an innovative version of the widely adopted Pacejka’s formulation, able to run in parallel with thermal, wear and road multi-contact models, becomes a necessity for applications requiring high compliance with the consolidated MF approach.

adheRIDE represents an advanced Pacejka-based interaction model, whose parameters are no more static or fixed throughout the entire run, but are variable with external physical dependencies.

The model comprises the following modules and features:

An example of the importance of the interaction between adheRIDE advanced MF and other physical tire models can be easily deduced analyzing the impact of tire tread core and carcass temperature quantities, not available from common onboard sensors (but provided by thermoRIDE tire thermal model), that deeply modify the tire dynamic behavior. The same can be said for the effects due to wear, to road roughness scales and to tread compounds viscoelasticity, identified by RIDElab and parameterized in adheRIDE for their reproduction in real-time simulations, laptime predictions and model-based data analysis.

With the aim to let adheRIDE users being able to autonomously parameterize and manage the tire digitalization, a specifically developed tool, called RIDEtool, is provided to the customers